Coalition in Support of HB367

As organizations that stand for rights and justice for all, we urge you, with one united voice, to cast your votes in support of this bill. Let the State of Florida make a stand for Healthy Pregnancies for Incarcerated Women. This historic legislation bans the inhumane and unjustified practice of routine shackling of those who are incarcerated during pregnancy, labor and postpartum. We stand united in support of HB367 and in support of dignity and safety for all pregnant persons and their babies. By pa ssing the Healthy Pregnancies for Incarcerated Women Act the state of Florida will become the first state in the South to pass anti-shackling legislation and will join a host of other states nationwide to ban the practice. Florida will be setting an essential standard for the human rights, dignity, health and safety of pregnant people regardless of their circumstances.

There are many considerations in voting yes on HB367. There is no sound reason to vote against it. Shackling does not make anyone safer; it actually creates more danger for the mother and baby. As the bill states, “restraining a pregnant prisoner can increase health risks and the potential for physical harm to the woman and her pregnancy.” The Federal Bureau of Prisons, the United States Marshals Service, the American Correctional Association, the American College of Obstetricians and Gynecologists, and the American Public Health Association all oppose restraining women during labor, delivery, and postpartum recovery because it is unnecessary and dangerous to a woman's health and well being.

During pregnancy, shackling increases the risk of falls and decreases the woman’s ability to protect herself and the fetus if she does fall. Shackling during labor may cause complications during delivery such as blood clots or fetal distress. Precious time can be lost unlocking and removing restraints, if emergency diagnostic and life-saving procedures become necessary[i]. Shackling during labor and birth causes emotional distress and trauma and is cruel and unnecessary. Shackling during postpartum recovery can prevent mothers from bonding with and breastfeeding their babies for the short time they are allowed to be together.

There is no need for shackling, as the vast majority of incarcerated women are there for nonviolent crimes. The average prisoner in a women’s prison is of reproductive age,[ii] is a mother to minor children, and is incarcerated for crimes of poverty and addiction[iii]. Many are survivors of abuse. Most are already in high-risk pregnancies[iv]. What incarcerated people need are dignified and comprehensive health services. The practice of shackling only furthers victimization and increases risk.

The practice goes against the 2002 Supreme Court precedent protecting prisoners’ Eighth Amendment rights to be free from inhuman treatment.[v] The United Nations Human Rights Committee and the Committee Against Torture have declared that shackling violates the United States’ obligations under international treaties ratified by the United States.[vi] The practice also violates the U.N. Standard Minimum Rules for the Treatment of Prisoners.[vii]

The rights of all of Florida’s citizens, including the incarcerated ones, must be upheld. It is the state’s responsibility to ensure safe and dignified pregnancy, birth and postpartum conditions for everyone in state custody. Birth Justice upholds every person’s right to birth in dignity and with respect. It is every person’s right to birth free from chains. We demand Birth Justice for all.

We are making our voice heard. We citizens urge you, representatives of the people of Florida, to make a stand and make history- vote YES on the Healthy Pregnancies for Incarcerated Women Act.

[i] Health care for pregnant and postpartum incarcerated women and adolescent females. Committee Opinion No. 511. American College of Obstetricians and Gynecologists. Obstet Gynecol 2011;118: 1198–1202

[iii] Latina Advocacy Network, New York Letter of Support. (April 2009). Some of the facts and references herein are borrowed from this letter.

[v] The Supreme Court has held that prison officials have an obligation under the Eighth Amendment to ensure humane conditions of incarceration and to protect inmates from substantial risks of harm to their health or safety. See, e.g., Hope v. Pelzer, 536 U.S. 730, 738 (2002). 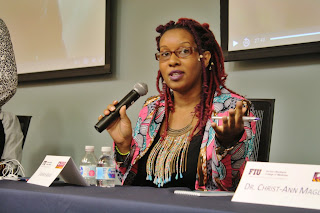 The Week after Black Maternal Health Week: The Struggle Continues

The Week after Black Maternal Health Week: The Struggle Continues by Jamarah Amani April 21, 2019
Charleena Lyles. Shalon Irving. Kira Johnson. Crystle Galloway.
So many names to lift up. #sayhername
All of these Black women have been slaughtered by this system in various ways. Police brutality, medical neglect and the stress of racism. According to the Honorable Malcom X, the most disrespected, unprotected and neglected person in America is the Black woman. When we talk about Black maternal mortality, we are talking about the conditions, policies and points of access that affect the quality of life for Black mamas and parents. Power disparities are the differences in the distribution of power among various identity groups. Power disparities relate directly to health disparities. A responsible discussion of health disparities compels us to consider the societal factors that determine Black folks’ experience on a daily basis that have a profound impact on health outcomes. When we analyze healt… 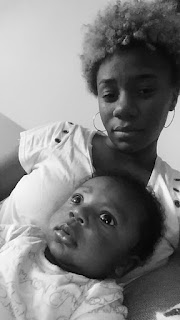 Welcome to the revival of the Birth Justice blog...

IN HONOR OF Mother's Day 2018, and as part of Forward Together's #MamasDay campaign, we interviewed Anaya Kendall about her experiences as a young Black mama. Her words uplift as she discusses both the trials and triumphs of being a Black mother.

What makes Mamas Day meaningful to you? Black moms have not got the respect or appreciation they deserve, especially moms who are doing it by ourselves. Some of us are working 6 days out of the week. We are trying our best to keep the house and kids together. Whatever you’re doing is the best you can and the best you can give to your children. We need a day to know that everything you’re doing matters and has a meaning whether you see that purpose now or not. Some mothers have to leave this earth not knowing that. Is there something you wish people understood about Black Mamahood? Someone called me bitter today but we take in a lot of bullsh*t. We take so much weight on our shoulders from … 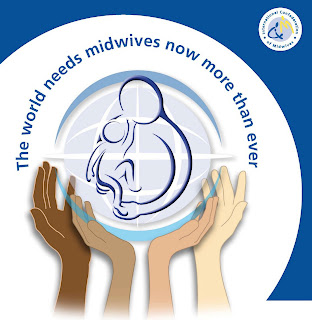 Midwives, Justice and the Corporatization of Birth

This statement is made in solidarity with Occupy movements around the world... Birth Justiceis a mother’s right to ensure the well being of herself and her baby; it intersects with all aspects of our lives – social, political, economic, spiritual and emotional. When mothers are empowered, a community is transformed. If we bring our babies into the world with justice, in the natural way, without anyone telling us how to do it, then it nurtures our innate power as mothers to create a free world for our children to play and learn and grow. Birth Justice includes access to holistic, humanistic and culturally centered prenatal, birth and postpartum care (the midwifery model of care), the right to choose when, where, how and with whom to birth as well as the right to breastfeeding support. The complete range of pregnancy, labor and birth options should be available to everyone as an integral part of reproductive justice. These are our rights as mothers.What is a midwife?Midwife means “with w…